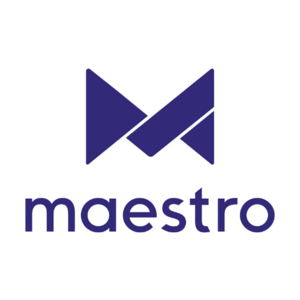 Maestro is an interactive video platform that makes it easy for broadcasters to build meaningful relationships with their audiences. Artists, labels, and venues are using Maestro to create free and paid interactive live streams to drive engagement and revenue. Paywalls, subscriptions, donations, and ecommerce are all fully integrated and customers ...

can easily launch on their own sites/apps within days. The solution is highly customizable and very easy to use. Customers include Universal Music Group, Coachella, deadmau5, Erykah Badu, The Grammy Awards, and more.

By adding an interactive layer, customers drive an average of 175% increase in watch time, 45% increase in retention, and 210% increase in revenue. The platform’s analytics help customers get to know their viewers, correlate engagement to key metrics, and understand how to maximize return on investment.

Outside of music, we work with Epic Games, FIFA, Microsoft, WarnerMedia, Activision Blizzard, Cornell University, and many other customers across verticals.

Prior to Maestro, Ari was a product manager at Zynga where he designed features, managed revenue, and integrated brands into CityVille, the biggest game on Facebook. Before Zynga, he was an analyst at Goldman Sachs. Ari holds an M.S. in Management Science from Stanford and a B.S. in Information Science from Cornell.

Interactive live streaming platform Maestro insists that artists, not platforms, should be at the center when the live music industry rebuilds in the wake of COVID-19. They should control their live streams, just as they can control many aspects of their IRL performances. Highly customizable in look and monetization options, Maestro streams live on artists’ own sites or apps. It lets artists and their...

Interactive live streaming platform Maestro insists that artists, not platforms, should be at the center when the live music industry rebuilds in the wake of COVID-19. They should control their live streams, just as they can control many aspects of their IRL performances. Highly customizable in look and monetization options, Maestro streams live on artists’ own sites or apps. It lets artists and their teams own the meaningful data that streams generate, giving full insight into its users. It’s about viewers, not views.

“We give artists more interactivity than Twitch with the ease-of-use and full customizability of Squarespace,” explains Maestro founder and CEO Ari Evans. “You can give people exactly the experience you want, set the parameters for monetization you need, and own your audience data, creating opportunities to stay directly connected.”

With more than 20 million users, Maestro lets artists sell tickets to their livestream at whatever price point they choose. They can create themes and overlays that reflect their visual identity, set up engagement features like polls or trivia questions, and prompt viewers as much or as little as they want to buy merch or “show love.” Once the show’s over, artists can access invaluable data for marketing, including viewer emails, that allow them to break down their audience into segments, figure out what features their audience enjoyed most, identify superfans, and promote their next livestream directly to people who care.

This all adds up to a livestream that benefits the artist, not the platform, and on better terms than many in-person appearances.

Maestro was built for the music business by a team of music fans. Though the platform got picked to stream major festivals like Ultra and Coachella and events by electronic music heavyweights like deadmau5, Porter Robinson, and Armin van Buuren, Evans was disappointed by the often cool response he got from music execs, ranging from wariness to confusion. He got a far warmer reception from the esports and gaming world, however, where livestreaming has long been an integral part of the business. Inking deals with big esports franchises (Fortnite, Overwatch League) and then sports leagues like the NFL, Maestro continued to thrive, though Evans and crew still longed to bring better live stream experiences to the music world.

Everything changed in March 2020. Live events vanished overnight. Labels and management companies were looking for solutions that addressed their needs but didn’t hand their audience over to the big tech players. “Numerous blows have been dealt to public trust in platforms and user data stewardship over the past few years,” Evans reflects. “Now, artists and managers realize that they, not some platform, need to own their data. Paying to build an audience and then paying again to reach that audience is a one-sided model.”

Maestro offered the perfect alternative for musicians. Evans’ phone started ringing and hasn’t stopped since. One call, late on a Friday night, was from Erykah Badu, who had a plan for a series of quarantine concerts. Performing from home, each concert would have a different interactive experience. During Apocalypse One, the audience chose the setlist in real time. During Apocalypse Two, the setlist was predefined and the fans were able to choose which room for the band to perform the song, each with a different vibe, instrumental setup, and visual flair. When she first called, Badu had already announced the first show and needed to find a partner to execute her vision in a matter of days, something simple to achieve with Maestro.

As musicians and fans are diving into live streams with unprecedented enthusiasm, the medium itself is at a turning point, transforming from niche novelty to general necessity in a flash. “We’re seeing livestreaming become the quintessential medium of communication. We’ve received requests to set up events like graduation and wedding livestreams, use cases no one would have thought about two months ago,” Evans muses. “We’re experiencing a permanent and profound shift that will impact how we communicate and relate. All ages are affected. It’s the transformative moment we needed to unlock the true potential of live streaming. Music stands to benefit most from embracing this opportunity.”

Evans sees the future of the internet in video and the future of video as interactive. “The great tragedy of live streaming is that we have this swiss army knife of the internet, and so far most live streaming options force us to use the dullest, simplest blade,” Evans says. “For years, people have been more or less making a TV broadcast and putting it on the web instead of thinking about an internet-first experience shaped by personalization and interactivity. Now that live streams are mainstream, that’s changing. Now we get to explore new formats.”